We have a closed garden. At least that is what we thought after we had bought the house and put up a little fence on the one and only opening that leads out to the street, in order to prevent the kids from escaping.

Then we got our puppy, Laika…

On the first occasion we let her out alone in the garden, she ended up whining in front of our front door (!), begging us, to let her back in. That is when we realised, she can easily crawl under the fence. So we put chicken wire in front of it. Then we put chicken wire around it as well, after we saw her simply strolling around it, through the bushes… And then we put chicken wire next to our little shed as well, where she could also escape… But no matter what we did, how much chicken wire we put around random things, almost every time she was let out through the back door, a few minutes later we found her sitting patiently at the front door… And unless she is a reincarnation of Houdini, which she is not, we came to the conclusion, that there is still an opening somewhere in the garden, we haven’t discovered yet.

Yesterday was a beautiful, sunny autumn day, turning into a beautiful, sunny autumn afternoon, that we happily spent in the garden, running around with the kids. And all of the sudden, Laika disappeared again… We started to call her name, and a few minutes later, she reentered our garden through the thick hedge, that is separating our garden from our neighbours’ open backyard. “Aha!” we thought 🙂 So 10 minutes and three more Laika-escapes later, my husband went to action.

Since we ran out of chicken wire, and covering the whole stretch of the hedge with wire wouldn’t be a too elegant solution, he decided, to improvise a little fence.

So he took some of the wood that was left over from the moving and renovation, some nails and a hammer. He nailed and nailed diligently, and so did our Babyboy, who is very much into imitating no matter what we do, nowadays. Our Babygirl escaped the scene in the meantime, and went into the house, to play with her favourite Hama beads. 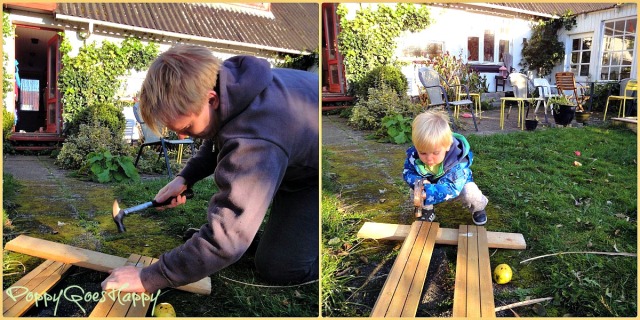 We really had fun building the fence, especially Babyboy, who thought that we are building some kind of bridge, and walked up and down the boards, probably imitating me, who had to use my body weight, and step on the boards while my husband was hammering them. Laika probably knew what we were doing and why, because she did her very best to prevent us from completing the fence 🙂 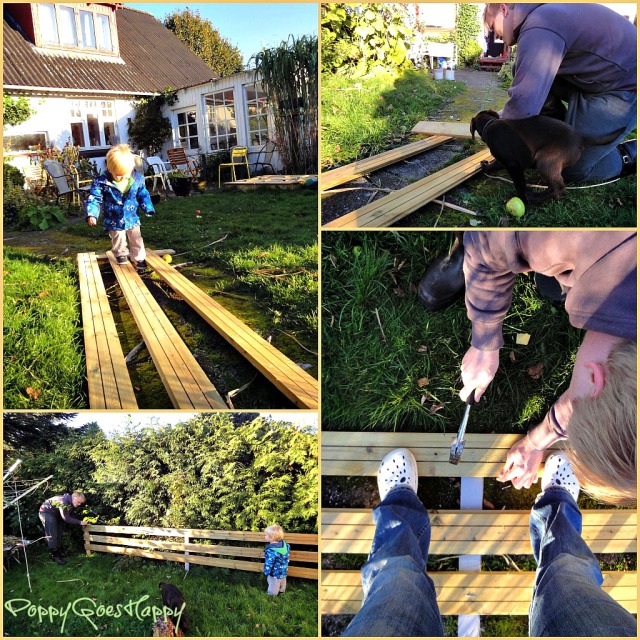 Once we were done with the first piece, we found out, that is not long enough, to cover the whole stretch, so my husband started to assemble a second piece as well. At that time I had to go into the house, to change Babyboy’s suspiciously smelling nappy, and then was caught up playing Hama beads too with the kids. But by the time I went out again, the fence was done:) It looks kind of nice, however a bit crocked, but hey, that is just the way we like things to be, ok? 🙂

Now we are really very eager to see, if Laika can escape again… Probably she can… I will keep you updated 🙂